Go to school they say, graduate they say, get a job they say, and you will be alright they say. But, in truth, life is more than just a boring and systematic 9 to 5 job. What other choices do you have other than working for a living? Well, there are endless choices. But you choose to be an employee, to work for someone, to hope to climb the corporate ladder, and be on top of the game. While that goal is smart, you’re just among the hundreds of hopefuls racing to get there. What makes you any different? What makes you stand out?
Did it ever hit you that you would be working for the rest of your life? All that skills and talents get you paid to do the job. Let us tell you something, you don’t have to. You only live once (YOLO!) and you don’t have to live a life to make someone richer than you or the richest among all of you. Now, if you have that dream to run your own business or if it ever slightly enter your mind to be an entrepreneur, then here are 10 movies that can really inspire you to be a business-minded millennial. “The Wolf of Wall Street” howls with lessons both in real life and in business. This movie stars Oscar-winning actor (finally!), Leonardo DiCaprio, playing Jordan Belfort. Here you will get a glimpse of the adrenaline- pumping stock trading action and nerve-wracking life of the brokers and businessmen.
Not to mention, the moving leadership and vision of Jordan Belfort, captures your senses to the bone. His words, vision, and excitement pulls you into the screen, and leaves you hanging on to the next scenes unfolding before your eyes. The movie teaches that leaders have a vision. Businessmen especially startup founders have the vision of where the company is heading in the next five or 20 years. Ask yourself, what’s your vision for yourself? Do you have the stamina to make it a reality? In the movie, Jordan Belfort started his own company from scratch, after his short stint in Wall Street. He had guts to start from the ground and up. Armed with self- confidence and greedy ambitions, Jordan believed in himself and his company. He trusted his gut that he can pull his company up by being the best at what they do- getting people to buy stocks. Leaders also lead through example and Jordan Belfort was one of the best in his field- sales and stocks! He is passionate about his job and for his part, he inspires employees to sell and make money. Sometimes there are more important things in life than school, a takeaway from the social network which follows the true story of Facebook CEO and founder, Mark Zuckerberg.
Not only pertaining to education; sometimes the system (like the corporate) as is, isn’t for everyone. The lesson here is that being pulled by the inspiration of a big idea within you is more important than doing what the “system” tells you to do. My advice is to follow your dreams, and as you go along, surround yourself with the smartest and most talented people you can find. The phase “from idea to execution” doesn’t have to be forever. Zuckerberg is living proof that with enough vision, talent and hard work, you can change your life in the blink of an eye. If you have an idea, don’t wait on it, because once you have a great product, money finds you.

“You got a dream. You gotta protect it. … Chris Gardner: It was right then that I started thinking about Thomas Jefferson on the Declaration of Independence and the part about our right to life, liberty, and the pursuit of happiness.” – Chris Gardner (Will Smith) The Pursuit of Happyness sticks in the mind as such an iconic inspirational film. Everyone should have seen this film, and especially those who have their own dreams that may be constantly put down by others.
As a recap, The Pursuit of Happyness is a based on a true story of the life of a single father, struggling to create a better life for him and his son. In life, Things May Become Worse Before They Get Better. What makes Chris Gardner’s story so inspirational is that he had such a hard struggle before he finally became successful.You don’t have to aim high in life, that’s up to you. If you aim lower things will be easier, but if you aim high then you really do have an opportunity to be all that you can be and achieve your dreams. This is certainly how Chris saw things.

If you’re searching for business inspiration, how about looking at what’s playing on the big screen?
The box-office hit “Joy”is a Cinderella story (with plenty of modern family conflicts) based loosely on the life of Joy Mangano, who overcame personal and professional obstacles to create a business empire. She started in the early 1990s by inventing the Miracle Mop that she sold on home-shopping television. But it wasn’t easy to bring her product to the marketplace, as the movie reveals. Be your own hero. With your business, you should never stop pushing and networking. It’s easy to give up when everyone around you tells you that “it won’t work” or “you can’t do it.” It takes guts, creativity and drive to go from business survival to success. (You’ll appreciate this idea more when you see the movie.) Ultimately, when you have enough faith in yourself, you’ll be as unstoppable as Mangano.

“I don’t throw darts at a board. I bet on sure things. Read Sun-tzu, The Art of War. Every battle is won before it is ever fought.”
-Gordon Gekko If you don’t know who Gordon Gekko is then you probably haven’t seen the 1987 movie, Wall Street. With the movie being released two decades ago, it still remains one of the best movies every investor should watch! Gordon Gekko’s quotes have made history on Wall Street and are full of bold statements worth thinking about.
The movie tells that If you are starting a business or project either you give your 100% time and effort into it or just don’t do it, as simple as it might sound to be always do it the best you can. Speculation is the worst enemy of business. Preparation and homework is ALWAYS required before making any big decisions. It’s true, though. Money never sleeps. While you go to bed every night, your money is working either for you in an investment or against you on a loan earning interest or some kind of return. However, if you apply the basic idea to personal finance, it’s actually very sage advice. You should always know what you’re doing with your money, and in turn, know what you’re actually investing in. If you don’t understand the investment–be it a stock, bond, mutual fund, commodity, etc.–you should study up on it and know exactly what your money is funding or not invest in it at all. 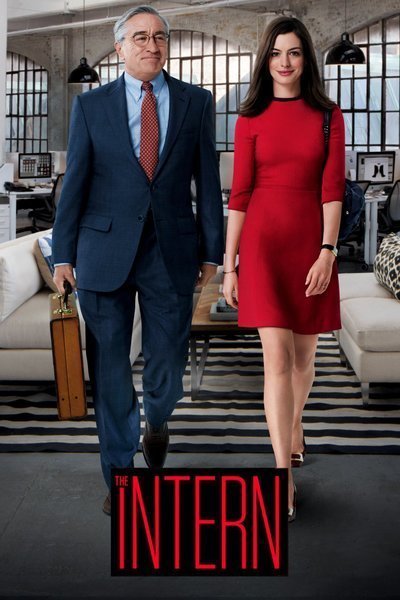 The movie stars Anne Hathaway as the founder of an e-commerce business that recently began hiring senior citizens as office interns. Robert DeNiro plays Hathaways’ office intern. The light hearted film included everything from the complex office dynamics, teamwork, to inter-generational communications and collaboration that offered a few stark similarities to the federal workforce today. Take the time to learn something new from a person outside of current generation at work. Sometimes it is just easier to work with the same “go-to-crew” at work because you’ve developed certain patterns of teamwork. However, you may miss out on new ideas if you don’t step outside your “clique” comfort zone and try a new project with someone you have never worked with before. You may be surprised what you may learn from inter-generational peers seeking to collaborate on any level. Get to know the people at your office. Take the time to genuinely find out your peers motivations, “dream” projects and goals. Also learn about their interests outside of work such as hobbies. It will help build trust, boost morale and remind you that your job isn’t just about task management. 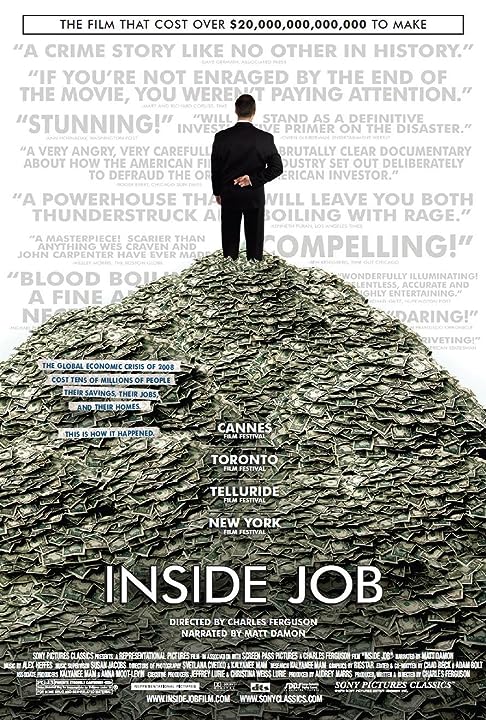 “Inside Job” won “Best Documentary” at the Oscars. Why? The ‘Inside Job’ was truly amazing and explains the inside out of how the big corporate caused the recession step by step and ultimately proved the old story –  ‘Greed is the big plague of mankind’. he film closes with the following statement: “The men who caused the crisis are still in charge. Some things are worth fighting for.” 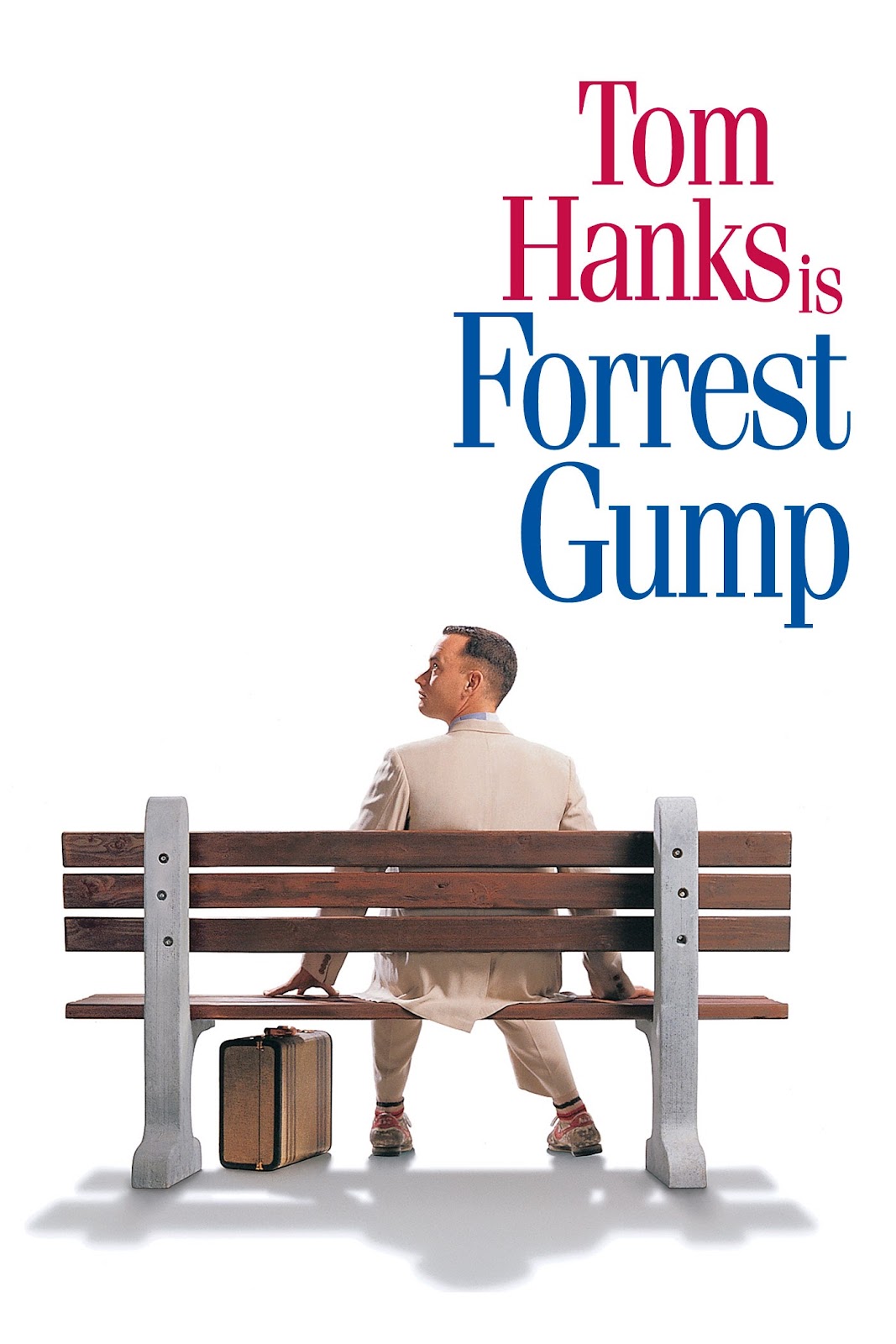 This is a beautiful story about a simple man with good intentions, who accidentally becomes a phenomenal success just by living his the life he feels is right.He wins medals, becomes a professional ping-pong player, takes up running, owns a huge shrimping company, and inspires people all across the country.The story revolves around the simple nature of Forrest (Tom Hanks) and how he proves that you don’t have to be a genius to achieve something. All you have to do is try.

This movie is about the Oakland Athletics and its general manager Billy Beane (Brad Pitt).The team is an underdog and is losing a lot of money. All of their star players have been picked up by bigger teams. Now, Billy needs to look at how to create a winning team without the kind of talent that money can buy.This movie shows how entrepreneurs can take an innovative approach to an existing way of doing business, and beat out the competition with little to no money.

Success is relative! The path to it is never easy, so work for your dreams like your life depends on it. Spend your downtime to a movie marathon treat. These movies are not some oscar-winning or nominees and pop-cultural references for nothing. Who knows, maybe you (reading this) might join in the ranks of Bill Gates, Zuckerberg, Steve Jobs, Warren Buffet, Jack Ma, Henry Sy, and The Ayalas, among others.
In any case you need extra budget, you can always get quick cash loans from PawnHero .
PawnHero is your go and beyond online pawnshop that is always here to give you access to affordable credit and to answer your short-term cash needs! PawnHero accepts a wide variety of items to give you quick cash loans anytime, anywhere. Just download the PawnHero app to start or visit the PawnHero website to learn more. Meanwhile, you can also shop for great deals at the online store, Marketplace.ph. Find carefully tested authentic pre-loved brand items up for the grab!