5 Surprising Facts Every Pinoy Should Know About Duterte 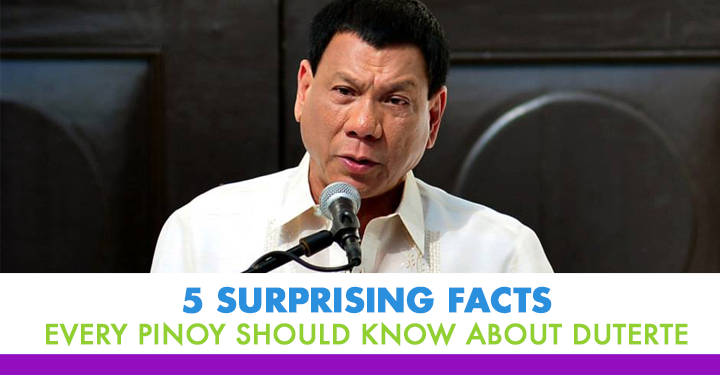 From serving Davao as a mayor for more than 22 years, Rodrigo Duterte, also known as Digong, Du30, is now the presumptive president-elect to assume Philippine presidency this June 2016.
Duterte’s “Change is Coming” campaign slogan has piqued the interest of many Filipinos. No wonder why citizens are expecting the Philippines to be in good hands. In fact, he earned almost 16 million votes!
Despite being compared with Donald Trump, Digong with his accomplishments has won the hearts of many Filipinos and even those from different parts of the world. He’s even featured on the cover of TIME Magazine (May 23, 2016) issue with the headline “The Punisher.”
Now that Duterte is projected to rule the Philippines for the next six years, let’s get to know him better. Here are some surprising facts you might not know about Duterte.

While he may be synonymous with operating outside the law, Duterte actually earned a law degree from San Beda College in 1972, and passed the bar in the same year. So, you can’t really accuse the man of not knowing what due process and the law is!

In August 2013, 31-year-old Maria Anna Luna Saguilo flagged down a taxi near midnight and was greeted with the smiling face of the former Davao mayor.
Her brother snapped a photo and posted it on social media, thus proving an urban legend that Duterte moonlighted as a cabbie–humanizing the tough politician and endearing him to his public even more. But, perhaps the happiest part of this story is that her taxi fare was free!

Ever since his first term as mayor in 1988, Duterte has taken up other positions such as vice mayor and congressman to get around term-limitations. Bar a three-year stint under his daughter, Sara, he’s been a mayor from 2001-2016! Every time he throws his hat into the ring, he wins! And the presidential elections was no exception!

4. His daughter is also pretty hardcore

We’ve already mentioned that Duterte played vice mayor during his daughter’s term as mayor in 2010-2013. However, don’t think for a moment that this means a softening up of the no-holds-barred mayor’s office.
During a shanty demolition in 2011, the fair mayor was incensed when a sheriff disregarded her request for a two-hour delay in beginning the clearing operations. She then showed exactly how upset she was by punching him four times. We imagine President Rody smiling silently to himself somewhere when this happened.

5. He listens to One Direction…


…or at least is updated enough to respond to the question “How do you feel about Zayn leaving One Direction?” with the equally relevant “Nothing is forever!” rather than asking what a Zayn is.
For an incoming president whose achievements include uniting the various tribes in Davao, perhaps his fun remarks when hanging with a bunch of kids show that the man really has a knack for understanding what ordinary people deal with!
Previous Article
Top 6 Ways to Defeat Your Debt
Next Article
Ultimate Guide to Surviving a Typhoon in the Philippines [Infographic]

Ultimate Guide to Surviving a Typhoon in the Philippines [Infographic]
Pawnina Bayani May 27, 2016
Pawn now