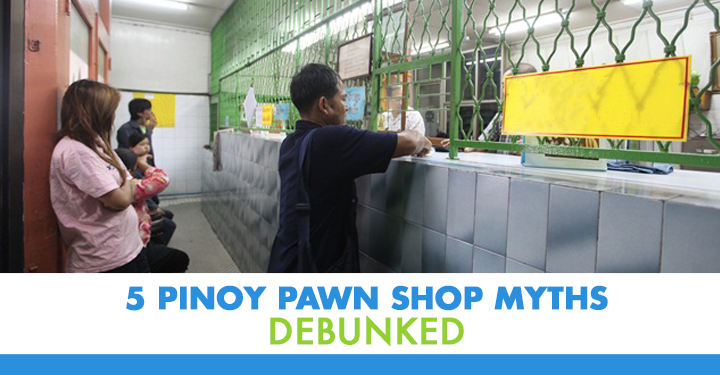 Pawning has long been a way of gaining credit. For nearly 3,000 years, pawnshops have afforded individuals the ability to trade in an item in exchange for cash.
In the Philippines, pawning items is especially convenient for Pinoys who want fast cash. Compared to going to banks where they will request documents and processing of loans take much more time, going to a pawn shop and exchanging your items for cash will be faster due to fewer steps and processes.
Unfortunately, pawning has gained an ill reputation through the years—mostly upon baseless assumptions. The media has portrayed pawnshops as seedy places for the desperate, which certainly is a myth. The truth is, pawning is something 3 out of 4 Pinoys use as a way of procuring cash when there is a greater need for a little extra cash.
Let’s dispel some of the myths:

FACT: Regardless of your social status, we all need some financial assistance at one point or another. If something unforeseen happens and you need quick cash, pawnshops are there.

Just because we’re heading to the pawnshop doesn’t mean that we’re a drug abuser looking for some spot cash to get our fix. It’s just that we may have come across a problem that requires short-term financial assistance.

In the Philippines, 72% of the population has been to a pawnshop before. Now, Pinoys don’t need to leave their house to canvas for the highest appraisal in physical pawnshops because PawnHero.ph lets you pawn your items at the comfort of your own home, saving you time and money that would have been spent going to pawn shops.

FACT: As pawnshops are guided by Bangko Sentral ng Pilipinas’ regulations, they ensure that the items offered as pawns truly belong to the person doing the transaction and weren’t acquired through robbery or theft. If they are fencing illegally acquired goods, the pawnshops will get into far more trouble than what their items are worth.

FACT: If Uber and Grabcar can’t operate without the proper permits, what more an establishment that is completely immobile? Before pawnshops can begin their operations, they have to secure a license from the Bangko Sentral ng Pilipinas, and all personnel involved in operations have to attend a Pawnshop and Anti Money Laundry seminar to ensure proper compliance as well.

4) MYTH: Pawnshops are after people’s possessions.

FACT: Some people think that pawn shops are greedy and that they won’t give you a good appraisal for expensive items like jewellery. So instead of pawning, they end up borrowing money from a family or a friend. Pawnshops actually give you quick cash in exchange for expensive items, especially jewellery. In addition to that, pawnshops present the kind of transaction that is safe, discreet, and quick. It’s less of a hassle than having to deal with someone you know. When you transact with PawnHero.ph, everything is done online so you won’t be bumping into anyone you know in that pawnshop near your house.

5) MYTH: There are better ways to secure cash.

FACT: All lending institutions have their pros and cons. Eighty percent of all Filipinos still don’t have a bank account so obtaining a bank loan is either impossible or takes time.

Borrowing money from a friend or family can get embarrassing especially when you can’t repay the loan. Selling your pre-loved items and letting go forever might also not what you want to do.

In pawning, you get cash immediately. Apart from the time of traveling to a pawnshop and standing in line to get your item appraised some pawnshops charge high interest, charge hidden costs and penalties for late payment but that’s often the only way to solve short-term cash needs.

Good thing there is PawnHero, which now lets you pawn your item without leaving your home. You can request for a free estimate by simply taking a few pictures of your item, and telling us for how long you need the money. If you like our offer, we pick up the item from your doorstep—for free!
Did you know? PawnHero charges half the interest of traditional pawnshops since the overhead costs to maintain a branch network does not exist. Even going into debt with your credit card can be more expensive. PawnHero accepts items ranging from jewelry, precious metals, luxury eyewear and watches, designer shoes, to mobile phones, electronic gadgets, and more. Visit PawnHero now to get a free estimate!

Tags:
Previous Article
10 Best Gadgets to Pawn and How Much They're Worth
Next Article
15 Items You Never Thought You Can Pawn

Latest Gadgets To Pawn And How Much They’re Worth
Pawnina Bayani November 24, 2016

What it Means to be a Millennial in a Developing Country
Pawnina Bayani June 13, 2016

Latest Gadgets To Pawn And How Much They’re Worth

What it Means to be a Millennial in a Developing Country